Arkansas is perhaps the only state in the union to rival Tennessee when it comes to varied geography. In a matter of hours in either place... you go from rice patties and swamps to mountains.

Starting out around Helena... we spend the first day riding past swamps... cat fish farms... and rice patties. The gravel roads we rode were a continual suprise... at every turn you could find 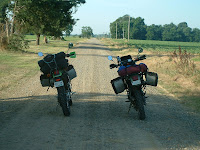 yourself in deep gravel (slick), or deeper pea gravel (really slick), or gravel on top of sealed gravel (why?) or our favorite... plain ol' dirt.
Each day it seemed we'd deal with an adjustment period in the morning... where we had to get our dirt legs back. For the first half hour or so we'd ride these roads at 30mph... by the afternoon we'd be riding them at 60. See... the whole thing takes a little getting used to. A street bike doesn't move around beneath you. If it does... its bad... perhaps very bad. To contrast... blasting down a gravel or dirt road... the klx dances around considerably while the glorious mx suspension handles the various ruts and such. At any rate... Sunday morning we came upon our first real challenge... slick silt... soaked in mud. A stretch of road... a nice stretch of road... water had spilled over from a farmer's field and created a dadgummed pond in the middle of a curve!

We stopped and walked around a bit and came to accept there was just no damned way around it. Believe it or not.. the video below is JAC riding through it.

We came upon a similar obstacle on the same road... no video this time... it wasn't in a curve.. but it was was deeper... and it lasted longer.
Easy boys... we're talking about motorcycles.

Now I guess it was Sunday afternoon... when we were really in the groove... riding hard... fast... through gravel and dust for miles... when the first of our tall tales jumped out into the road.

I had just made a left turn onto yet another gravel road... uphill... I cracked the throttle wide open and put my left foot down... shift to second... 9000 rpms... shift to third... the KLX is running so good... its loosened up and the power is delivered well... I top the hill... and I'll be damned if this 3 toothed redneck in overalls didn't run out into the road waving his arms like he had some sort of palsy.

Orin: Man... I sit down here ever day man and I see these crazy fuckers on motorcycles man... they all ride down this road... but they never come back man!

Orin: I dunno what the hell's down this road but whatever it is... it don't like motorcycles man!

Orin: I'm just fuckin' with ya man! HA! No really y'all are ridin' that trail ain't ya? I knew ya were. See... for a long time I didn't know what the deal was man. These bikes would pass by here... but they'd never come back! Finally last week I saw a group comin'.. so by God I went out there and stopped 'em. I was like, "Hey.. what the fuck are y'all doin' out here... where the fuck are you goin'?" Hehehe.. man... they was from England... so you know I think they was a little taken aback... their eyes got big and stuff... but they told about the trail so I got in there and looked it up on the computer man. Now I have to take a break from the dialog here... which I must remind you is a completley accurate representation of what we listened to in stunned silence. I mean.. until we burst into laughter at the thought of some terrified euro peons confronted with an honest to God Arkansas redneck. Poor guys must've thought they'd stumbled into the set of Deliverence.

JAC: man y'all have some beautiful country around here... we've seen catfish farms... rice patties... everything.

Orin: Oh yeah its pretty nice. Have y'all noticed them trucks with the big oxygen tanks on the back? Them things are haulin' live catfish man... all the way up to New York. Don't ask me why they bother haulin' 'em alive...

Orin: Oh them chinamen up there eat the hell out of 'em man... but they don't know no better. Its just like them black berries. Down the road there's a big black berry farm.. classy place man... ol fella and his two boys runs it... well the ol' man was tellin' his boys to pick a bunch of berries but his boys didn't think they was ready... you know they was the right color but the glaze was all wrong... so they was like.. you know... "dad these ain't ripe yet." That ol' man got all pissed off... "Pick them damned berries and ship up to those damned jews in New York! They ain't never had no damned black berries! They don't know!"