The plain truth is folks... the stock on a rifle is a damned waste of space.  It adds precious length to the weapon that could otherwise be used on a longer barrel.  And so... it is the sole failing of John Browning Moses that he did not see this... and therefore failed to invent the weapon configuration that is only just now beginning to dominate the military world.... the bullpup.

But lets backup.  The bullpup design goes way back to 1918 to Lt. Col. Armand-Frédéric Faucon.  Honestly... other than the fact that he invented a rifle with the action in the stock...  we know basically nothing about this man. We do know that another froggy type... Henri Delacre patented a bullpup type submachine gun in 1936.  Wikipedia mistakenly calls this a pistol. 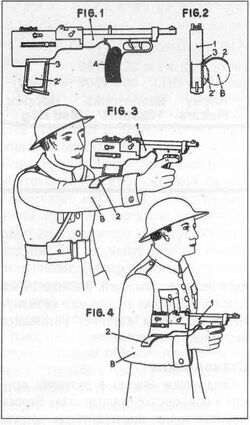 Not really a pistol.  That's a submachine gun.  Unfortunately we don't know any more about Henri than we do about the Colonel...  which is infuriating.   Thankfully..  we do know something about the next designers.

A Polish firearm designer fled to England during WWII and went to work for the Enfield at the Royal Small Arms Factory.  After the Sturmgewehr 44 had made such an impact on the battlefield... the assault rifle race was on... and that polish designer...  having assumed the name Sefan Janson would be leading the charge for the UK.  The result as was the EM-2... the next bullpup.  It fired a .280 round and was accurate out to about 800 yards.

Now.. you've probably never seen this weapon before... because it never got adopted.  See at the time NATO was going through its standardization.  The US had introduced a .308 and was pushing hard for it.  The brits felt the .308 was to powerful for controlled fully automatic operation... and obviously favored their .280 design.  FN-Hestal had also come with a .280... but in a different design.  The .308 won out in the end...though in the long run it turns out the limp wristed brits were right... because the .223 we use now is a step down considerably from even the .280.

And from here you know the rest...  The FAMAs... the Steyr AUG...  all the way to the present object of lust and praise... the Kel-Tec RFB.

But here's what you may not know.  Today... worldwide... more military rifles are being ordered in the bullpup configuration than in the standard configuration.  China... Canada... Australia... the UK... all use bullpups.   A bullpup with 16 inch barrel handles like a sub machine gun...  it literally saves 20% on the length of the weapon... and in close quarters and urban combat... that length means everything.

I always thought bullpups were kind of neat.

Biggest downside that comes to mind is if you ever have a catastrophic failure of the gun the chamber is right next to your face or body.

Catastrophic failure just isn't something that keeps me up at night. The metallurgical arts have come a long way.

No, you are right, all of the horrific failures I've heard of are due to somebody double charging a handload.

If it is a rifle, this isn't a big problem, a double charge won't fit, and should be detected. In a handgun cartridge, say .45, it could.

So if you had a bullpup configured sub machine gun in a handgun round that you handload for, be damn careful.

This doesn't apply most of the time for most people.

Casting flaws, inclusions, while I see the advantage to shortening the rifle while keeping the barrel length, I like the action being away from my face.

and I like being able to go through a door while aim down a 16 inch barrel with a .308 in the chamber.

Quite. When I see a picture of a bullpup grenaded... we'll talk.

ajw, You can proof test them.

That doesn't protect you from using 231 instead of 748, but I wouldn't worry about undetected flaws if the gun is proof tested.

I also have no idea if it is standard practice to proof test a gun, and how you'd do it if the factory didn't do it. But it is a way that your concerns could be allayed.

How often do you see/hear of receivers failing. I agree it's unheard of.

I don't like the thought, but I do see the utility of a bullpup.

Seems to me that a sawed-off would be better for close range, though having the option of actually hitting things further away would make this significantly more versatile.

So have you tried the Kel-Tec RFB or shottie?

I've handled both. I've not shot either. Both are extremely fast in the hands. Scary fast. Video game fast.

Some SU-16 receivers have apparently failed... did not stop me from getting one at JAC's recommendation. I like it, and I'm happy that I did.

My friend has made a bull-pup chassis for the M14. He holds a large ransom for one though. I hope to afford one before a ban. Juggernaut Tactical M14 Rouge. Shoots great, but the M14 shell extraction will throw hot brass on your forearm firing offhand.

really? I know Kelgren was talking about ramping up production for everything... but he is really not the type to cut corners. if he was... there would be RFB's out there in the wild for folks to buy.

From what I hear, bullpups seem to have rather crappy triggers due to the trigger being so far from the action its self.
If using iron sights they would tend to have a shorter sight radius as well. While they may be fine in a 223 I'm not sure I would dig one in a 30 cal.

Allabaster... The AUG is a .308. I do believe its fairly effective.

Bullpups? Slow to reload, weird controls, can't be fired offhand. If the cartridge is so weak that it needs a 20+ barrel to be effective, that's an issue of the cartridge, not the gun design.