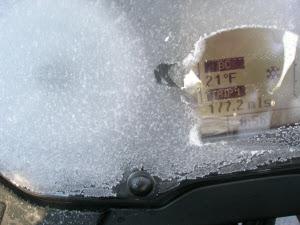 See that? That's the trip computer of a 2006 BMW 1200 RT. Note the temperature. Brrrrr.
This is what I love about BMWs and their riders. They are just that; riders. They aren't grown men playing dress up, pretending to be biker badasses.
Beemer guys and Harley guys... they're probably both lawyers. The difference is the Beemer guy is actually out riding his bike... putting miles in the saddle. The Harley guy is spending his time shopping for assless leather pants... talking harley fashion with his friends.. and talking about taking another 10 minute "ride" downtown.
Now... does this description fit all Harley owners? Well no. Of course it doesn't. But its become so common that it is a justifiable asumption, and one the few decent harley owners have to acknowledge. There simply is no more plausible deniability. To many pussies... and to many women are riding Harleys now.
To me... the most telling aspect of all this is the typical harley response to an insult to the capability of his bike. For example... any time I point out that one can ride at sub freezing temperatures on a BMW 1200 RT... or that one can ride for 6 hours straight without getting sore... the response from Mr Harley Dude is always the same. He just smirks and says, "Why would you want to do that?"
And then it occured to me...
Show a woman a rodeo... or the dirt trails... tell her about your next great adventure... ya know what? Unless she's a truely rare female indeed... she'll smirk and say, "Why would you want to do that?"
She just doesn't get the sheer glory of it.
Neither do the Harley boys.
Posted by Nate at 3:51 AM