Big Day at the Canyon 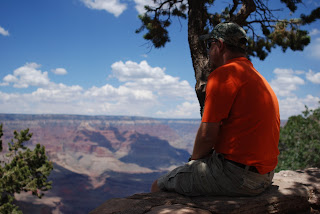 I have to share a few short stories...
While riding the train up... Jeb and I made our way to the rear of the car where a large groop of limeys informed us that there was a "que". While standing in line I overheard one of the women remarking about the excellent landscaping. I'm paraphrasing here but it went something like this:
"The landscaping is unbelieveable. I mean you really feel like you're out in the middle of nowhere. You'd never know you were in the middle of a modern industrialized country." 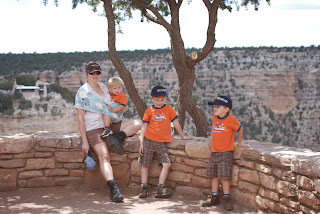 I had to let that sink in for a while... I kept listening and confirmed that she honestly believed there effectively in the middle of civilization. Like a park that if you just got off the train and walked a couple minutes you'd find a gas station and hotel.
Once in the park... I found myself in a little ice cream shop waiting in another line. There was a group of teenaged girls in front of me... more brits... and an Aussie behind me who was inexplicably sober. The aussie was an old man having the time of his life and he was talking to anyone and everyone around him including me and the girls. 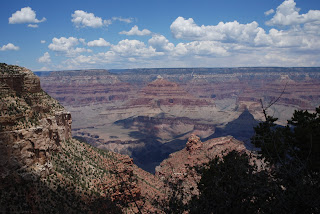 The subject of knives came up and he asked about them being illegal in England. They were chatting about what made a knife illegal and what did not when one of them stated that civilized people don't carry knives and knives are not necessary in a proper society.

She then made the egregious error of asking me if knives were legal to own in America.
I flashed my fancy digital camo SOG open... and the girl damned near lost her composure completely. She went pale. Her eyes got big as saucers... and she started stuttering. "W... why would carry that?"
"How else would I cut my nails?" 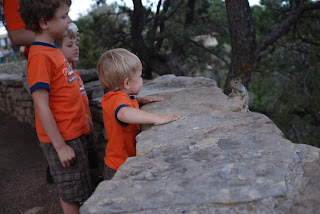 The aussie was behind me making a heroic effort to stifle his cackles.
"That knife is of no use."
"I know. That's why we carry firearms sweetheart."
"You own guns???"
"Several. And I carry two or three everywhere I go. My wife carries a Glock .45."
At this point the aussie chimed in. "Mate... that's a fine woman."
Ok... one last story.
If you'll notice in the pictures above the squirrels are extremely friendly. Of them took quite a shine to the boys and kept coming up to them to check them out. He got so close to Elkan... that the boy picked up the bottle water we had resting on the wall and tilted it down for the squirrel.
"Eat?" offered the generous 2-year-old.
The squirrel was clearly tempted... but noting the looming father figure... he wisely scurried off.
Posted by Nate at 8:31 PM