Lucedio Abbey: The Most Evil Place in the World

My friends... this is a night for Ghost Stories... and what better tale... than that of the only battle for territory that Satan may have actually won.

The story starts in northern Italy... not that far from you I imagine Spacebunny. In 1123 the Abbey was constructed and housed about 50 monks for a few hundered years. Everything went well... until sometime around 1684.

Its said, and written, that young girls in the area began seeing Satan in their dreams... and he began telling them to go to the Abbey. In fact... many did. The girls are said to have currupted the monks there until the Abbey was no long a place of God... but a temple of torture, child rape, and open defiant Satan worship. Men of God... Men who had dedicated their lives to Him... were lost. 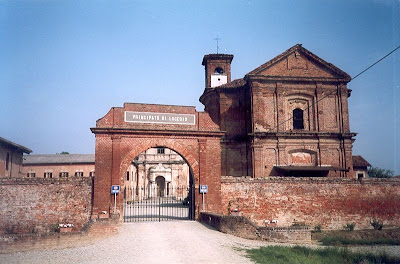 For 100 years this went on... The Church excercised the Abbey... the battle raged... but in the end... The Church... believe it or not.. is the one that gave up. They imprisoned a great evil in the chambers beneath the building known as the People's Church... and they selected many Abbotts to be buried there. They were all buried in a seated position... in a circle... as if watching something... and through natural causes... all have been mummified.

It is said that Satan walks the whole earth... but maybe he has a fondness for northern Italy that causes him to linger.