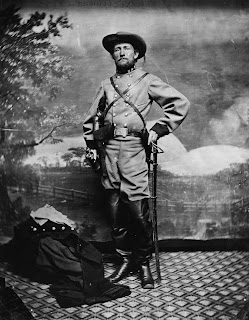 John Singleton Mosby was a Virginian with a penchant for violence. To be remembered as such would probably do him proud. See Mosby was practicing law when the war broke out... and immediately joined up with J.E.B. Stewart's cavalry. Mosby quickly rose through the ranks and soon became J.E.B.'s trusted right hand man. In fact... it was John Mosby that facilitated the Stewart's famous ride around McClellon.

It wasn't long before John was asked to go off on his own. He was given permission to recruit some partisan rangers and take them to war. He started out initially with one battalion of rangers.

With those few men... he managed to raise all manner of hell throughout northern Virginia. Mosby, like his contemporary in the west Nathaniel Bedford Forrest, was a gorilla fighter. He was a hit and run specialist... and the yankees loathed him for it. Large forces were frequently sent to destroy his little band... and every one of them failed. Most of them failed spectacularly.

In one such instance... Mosby and 29 of his men road into Fairfax Virginia one night where Union General Edwin H. Stoughton slept. Mosby woke him up with a slap on the ass. The general shouted, "do you know who I am?"

It was dark and the general was apparently a little slow that night. He said, "Why? Do you have the scoundrel?"

I'm certain Mosby smiled as he put his pistol to the general's head and said, "No. But he has you."

Things got so bad that Lincoln ordered that if any of Mosby's men were captured, they should be killed. George Custer actually executed several himself.

Mosby made a terrible problem of himself throughout the war... until Lee surrendered. Rather than surrender himself... he simply disbanded his unit and moved to San Fransisco. He settled in well out west. He eventually befriended a young boy that lived nearby. He and the boy would draw up battle plans in the dirt and re-enact battles. Mosby spend years teaching the little boy everything he knew about tactics, leadership, and battlefield management.

That little boy? You've probably heard about him to...

Inspiring stuff. I decided to find out more, and discovered that it was Mosby's rangers that carried the surrender orders to Appomattox. Yet because he willingly served in several federal government positions after the war, he apparently "received death threats, his boyhood home was burned down, and at least one attempt was made to assassinate him." It makes you wonder what sort of person would have such a combination of viciousness and stupidity to do such things to an honorable man who stuck to his principles until the very end. Thanks for posting!