So it turns out that I only have one friend that actually owns and uses a Macintosh laptop. And believe it or not... she's a programmer. You'd think she'd know better. Regardless... this otherwise beautiful, brilliant, and otherwise extremely tech-savy girl does in fact use the abomination in question.

Imagine my joy when the other day she lamented her laptop issues. Trouble with the mac? Couldn't be. After all... Macs "just work". Right? We hear that all the time.

Well not only does her Mac not "just work" its not even her Mac. Her Mac failed to "just work" so badly that it had to be taken to the Apple Store to be repaired... and what she was complaining about wasn't even her Mac at all... but the loner the Apple store had provided. Apparently, it randomly would shut down... way to often. Infuriatingly often.

So I looked her up to play some WoW the other night... and she informed me that she had no laptop at all... and that she was going to buy a "Gaming Laptop".

Now lets consider how this trial could've gone differently... She probably spent over 2k on that Mac laptop. So for that same amount... she could've bought 1 comparable windows laptop... and 2 slightly older back up laptops that would still perform in case the nicer one went down.

I buy what I call a disposable laptop every year. I find something for 4 or 5 hundred bucks... and use it until it dies. If it lasts a year... I figure I've gotten my money's worth. If it lasts longer... bonus. So far.. I have accumulated 3 laptops this way... and none of them will die. I almost threw one of them away... because the keyboard was destroyed by Eli... and I didn't want the hassle of taking it to a shop and paying a repair bill.

So I bought a keyboard off ebay for 3 bucks... and used the other 2 laptops until it arrived. When it did arrive... it took all of 30 minutes to install. 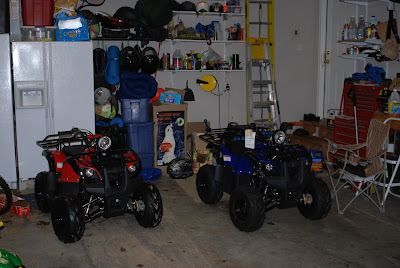 Yes... those are two 125cc atvs. I skimped out and bought the chinese ones because honestly they are a quarter of the price... and well... I have two brothers that are industrial mechanics. Special thanks to Welldigger and Papa who actually were at my house when they were delivered. They assembled them completely... examining all the critical parts and replacing much of the hardware with superior quality pieces... all the cotter pins... many of the fasteners... ect... I was out of town... and they spent hours on the job. Its greatly appreciated.

Perhaps tomarrow a video will appear.

For unto you is born this day in the city of David a Savior, which is Christ the Lord.
And this shall be a sign unto you; Ye shall find the babe wrapped in swaddling clothes, lying in a manger.
And suddenly with the angel there was a multitude of the Heavenly host praising God, and saying,
Glory to God in the Highest, and on earth peace, good will toward men.
Posted by Nate at 5:49 PM No comments: