We've got a big pool party set up tomarrow... so between that and Vox's Fantasy Football Draft I suspect I'll be loaded most of the day. Unfortunately... at some point I have to sober up and help a couple kids.

So ummm... I need some help. See... These two girls... they're good kids... but their parents are sending them off to some damned public high school where they are encountering... well... I don't have to tell you. Now their mom and dad have both talked to them about boys... but apparently... well... I don't know... God has decided to punish me for the sins of my youth.

To make a long story longer... their mom wants me to "talk to them". She figures the "boy's only want one thing" talk will have a bigger impact coming from me.

I'm not making this up.

Ok.. I'm gonna go crawl in a bottle now... if any of you want to off pity or advice... I'd very much appreciate it. 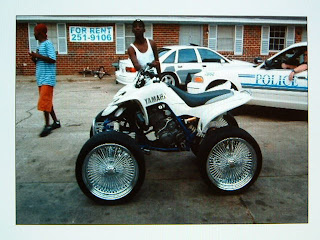 Casings and Copper
and Primers and Powder...

Bookers and Bakers
and pipes of tobacc'r...

Thats what little boys are made of.
Posted by Nate at 12:22 PM No comments:

Wallowing In The Misery of Others

Look... I'm not the most compassionate man. In fact... I can rightly be described as cruel. But I do have some standards.

I simply cannot stand to listen to the clips of that Ms South Carolina butchering that question. Its not funny. Its not entertaining. Its painful.

Enjoying the humiliation of another human being over and over is not christian behavior. Its not decent. Its loathesome.

Its amazing to me that people normally apaulled by such things are gleefully taking turns metaphoricly stomping on this girl.

I wonder... how many of you feeling so good about yourself at her expense have ever looked into a TV camera, or done any public speaking at all? Think its easy do ya?

There's such a thing as an off button. I've been using it a lot today. I hope you have as well.
Posted by Nate at 10:42 AM No comments:

What do you call a fly with no wings?


Why to gorillas have big nostrils?

Because they have big fingers.


What do you call a boomerang that does not come back?


What do you get when you cross an elephant and rhino together?

ELEPHINO.
Posted by Nate at 6:20 AM No comments:

Holy crap y'all... Corey Simon just signed with the Titans. That means we get to watch two of the 3 or 4 best interior d-linemen in the league play side-by-side. Simon-Haynesworth is arguably better than the monsters that Jacksonville boasts.

I cannot begin to explain how huge this signing is. Tennessee had a terrible run defense last year... but when you look at the D now... I really don't see anyway to run the ball effectively against it. Up the gut you face Simon and Haynesworth... backed up by a big hitting middle linebacker like Fowler or Steven Tullock. If you decide to run outside, you have two of the fastest outside linebackers in the game in Thornton and Bulluck... not to mention Michael Griffin.

I was pretty conserned about our D-line before. Brown and Starks were improving but they weren't proven. Simon... holy cow.

That one addition could be the missing piece that really puts the run d way over the top.
Posted by Nate at 6:44 AM No comments:

So... for decades now we've had the human/ape split narrowed down pretty good... in fact... just last week the Evolutionist Faithful would have called you an idiot for claiming that they didn't know withing a few hundred thousand years when the split occured.

And then they dug up this fossil... and low and behold... now they realize they were off by oh... 6 or 7 million years.

Can anyone name a science that does this? Oh... we were off by 6 or 7 million years... our bad. They say this with a straight face and expect us to listen to them the next time they tell us they know something for a fact.

Its assinine.
Posted by Nate at 1:05 PM No comments:

RM comments: My point is still that he made no mention of geography


Exactly. When I spoke to Jeb about what a yankee was I described behaviors. I didn't describe geographical regions. If I were to sit and try to list all the places that "yankees" come from I would be talking for a long time. California... Oregon... Washington... Minnesota... Michigan... Ohio... Illinois... Indiana... I'd even have to include Atlanta and South Florida for crying out loud.

I've often stated that the real rift in the US is transitioning from a North South rift, to an Urban Rural rift... and yes... I would describe city people the same way I described yankees to my son.

That's what so fun about english. One word means lots of different things. This isn't relativism. Consider the word love. Do you say you love your brother the same way you say you love your wife? Not likely. Eros is something I'm thinking you don't really feel for your brother. But in english, we don't have 4 different words for "love" like the Greeks. We only have one.

Oh dear... It seems that our dear little Matt has wadded up his panties. From these comments... its almost like he doesn't like me. I hope that's not the case... I mean... if I thought he really didn't like me... I just don't think my fragile psyche could stand up to the strain.

"So the southerners I described didn't exist.Okay I just wanted to make sure, you lying hypocritical fraud.Goodbye, liar. Good luck poisoning your son's mind with total bullshit instead of telling him the truth. Obviously, it was the manners and stench of the "yankees" the confederates should have worried about and not their disregard for the freedom of their fellow Americans. Looks like you're the real yankee here, according to your own definition."

Now seriously... if that's not the haloscan equivalent of stomping your girly little high heel, stomping off to the powder room and slamming the door behind you... I just don't know what is.

See... Matt and I both made claims... I claimed that yankees were lying assholes that can't be trusted and spend to much time telling others how to live. Matt claimed that all southrons used crack.

In turn... Matt produced no evidence of these crack using Southrons... while I provided an example of yankee that fit my description perfectly... Matt himself.

So... Mattie... when you get done in the powder room... dry your little eyes and sling back home. Like the vast majority of the northern transplants currently infesting Dixie... no one here wants you around.

Why Nate Be Slow

Man does this piss me off. If this rings a bell its probably because you're remembering how the KGB employed the clergy in the USSR.

Any "minister" that agrees with this tactic and this premise should be de-frocked... and tarred... and rolled in thumb-tacks.
Posted by Nate at 6:53 AM 4 comments:

So we're driving home from a day of procuring vital provisions... the boys are happily watching some episode of Larry Boy or another... when my lovely and observant wife notices something.

Its seems that the villians in Larry Boy always seem to have a yankee accent.

We were happily discussing this glorious new found information when from the third row I hear... you guessed it...

I thought for a moment... I answered.. and edited my answer 1000 times in my head in about 2 seconds... and finally I decided on brutal honesty.

The seeds were planted years ago.. but it looks our son's first history lesson was today.
Posted by Nate at 12:18 PM No comments:

For the Love of All that is Good and Holy...

The A-Team is My Neighbor

During the late 90's... around the same time the milita movement was kicking into high gear, another phenomena started catching on. It was called different things in different places... but basicly it was cellular chain. The idea being... you have a preset emergency dial button... that doesn't dial 911... instead it dials a friend, who then uses his to dial another friend.. and so on and so forth. So if something bad happens to you, you simply hit speed dial 1, and wait for the cavalry which will arrive shortly... in the form of your armed and pissed off friends.

As cell phones have advanced the effectiveness of this rapid response tactic is even better. For example now you can your phone set to send out a group text message.. so everyone would get the same message at the same time... speeding things up considerably.

The benefit of this type of response is considerable. For one thing, your neighbor can get to you a great deal faster than the police can... for another... he'll be there to defend you... not to enforce some law or another.

Your neighbor will have a very clear idea who the good guy is. He knows you. He won't have to ask questions before he shoots. Believe me... he sees a freak with a knife and a hard on... he's gonna shoot.

This is an idea born of Waco. A large group of jack booted thugs can get away with a lot if there ain't witnesses. But imagine the ATF showing up, only to be confronted by 25 armed, and pissed off citizens. I can assure you things are handled with a great deal more civility.

I wonder if its not time for us to revisit this plan.
Posted by Nate at 2:19 PM No comments:

The Bible is best taken like fine whiskey... undiluted.
Posted by Nate at 2:01 PM No comments:

The magic lady on the phone can't keep the badman from shooting you in the head... and she can't get the cops to you fast enough to help.

I can't help but think this may have turned out differently if the lady had relied on her own self for protection... and not the magic telephone protection fairy.
Posted by Nate at 6:27 PM No comments:

In Defense of Nepotism

So it turns out that one of the local assistant district attourneys here is from on of the old money families around.

She has a large Confederate Battle Flag hanging on a wall in her office... and apparently it doesn't sit to well with the local cheif detective who happens to be black.

Shortly after she started working he came into her office, saw the flag, and demanded she remove it. She told him to piss off... so he went to the head DA... who dealt with the situation by simply telling them to stay away from each other.

See? If she wasn't in the family she's in... she would've had to take that flag down. So in this case... Nepotism kicks ass.
Posted by Nate at 6:10 AM No comments: