Bad Joke Wednesday
Let's start with my boy Eli's favorite joke.
What's a whale's favorite game?
Swallow the leader.
Why is bra singular but panties is plural?
What do you get when you cross the atlantic ocean with the Titanic?
Halfway.
Did you hear about the cannibal that got expelled?
He was buttering up his teacher.
Man walks into a bar looking forlorn. Bartender asks him, "You've been walking on air for weeks mate, what's wrong?" The man says... "My wife an I had a fight and she kicked me out for a month. Months up today."
Build a man a fire and he'll be warm for a day. Set a man on fire and he'll be warm for the rest of his life.
Hey.. My name's Pavlov. Ring a bell?
Why does a moon rock taste better than an earth rock?
Its a little meteor.
Bert asked Earnie if he wanted some ice cream. Earnie said, "sure, Bert."
Why do bicycles fall over?
Because they're two-tired.
What do Alexander the Great and Winnie the Pooh have in common?
Same middle name.
Posted by Nate at 7:47 AM No comments:

Solar Power, Sort Of
Lets put the solar problem for example... in perspective.
The US uses 29PWh per year in energy. That doesn't sound like much until you realize that a PWh is 1 quadrillion (that's a 1 with 15 zeros behind it) watts. 29 of THOSE. That's a lot. Right?

Now... it take About 4.5 acres to make 1 mega watt.... which is 1 million watts. (that comes from a tree hugger pro-solar site, so with the standard fudge factor its probably twice that much but for the sake of argument will pretend they aren't fibbing.)

Ok.. so there are 2.3 billion acres of land in the US (I did not survey it myself. I googled it. Its a big number and I expected a big number so I went with it.). So if we were to wipe out the entire USA... clear cut the whole thing... and assume that all of it will produce electricity at the best possible rate.... A little division tells us that's 511,111,111 mega watts. In reality that number is WAY over estimated but again... we'll go with it.

I see your eyes glazing over.... you're seeing BIG number and another BIG number but the perspective is hard. So let me spare you the trouble of pulling out your old scientific calculator... and point out that if we wiped out the whole US... and covered it with the most advanced solar power plants we wouldn't even make .0000058% of the power we currently consume.

That... is how utter pathetic and useless solar power is.
But look... do you really understand how small that is?
One more bit of perspective for you... imagine owing a hospital 1 million dollars. Its do now. Right now. And you have $58 bucks in your checking account.
I did all this on my own... mostly in my head... so please feel free to check the math. I will include any corrections that need to be made here. Regardless... you'll see that solar is simply pathetic.
Posted by Nate at 6:18 AM No comments:

Ride dammit.
Ride.
Posted by Nate at 5:36 PM No comments:

You ask... where is my flying car?
Here is your flying car. And yes... it is a real company and it received FAA permission to begin production just a few months ago. Want to know more?
Posted by Nate at 6:41 PM No comments:

Paper Does Not Beat Rock 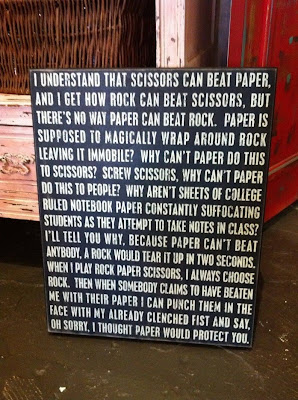 Heads Up
There will be an ATF post this friday. You have been duly notified. Booze... Guns... Smoke. Can't beat it. We will be talking Semi-Auto Sub guns, close combat rifles... and some of the new firearms that have come out like the new Raging Judge.
Bring your bourbon and smokes.
Posted by Nate at 1:28 PM No comments:

How long till its weaponized?
So I'm mucking about the internets... minding my own business.. and what do I see?? This.
Bloody. Hell.
We have a fungus... that turns ants into zombies. Are you listening people? How long do you think it will be before this crap is weaponized and ready for use on humans? Years? Months? Hell it probably already is.
That's it... Zombie Preparedness... that's the next big startup. We need Zombie Preparedness camps... corporate retreats... everything.
TSHTF boys. Its a matter of time before some psycho rag head lets this crap loose in the name of Allah... or... the US government itself doses the whole country from the sky to save money on public schooling.
Posted by Nate at 11:55 AM No comments:

Labels: impending doom, TSHTF, Vox is a fairy, Zombies
Bad Joke Wednesday
I know its been forever... but why not?
Begin!

Far away in the tropical waters of the Caribbean, two prawns were swimming around in the sea - one called Justin and the other Christian. The prawns were constantly being harassed and threatened by sharks that patrolled the area. Finally one day Justin said to Christian, "I'm bored and frustrated at being a prawn, I wish I were a shark, then I wouldn't have any worries about being eaten..." Just then a mysterious cod appeared and said, "Your wish is granted!" and, lo and behold, Justin turned into a shark. Horrified, Christian immediately swam away, afraid of being eaten by his old mate.

Time went on (as it invariably does...) and Justin found himself becoming bored and lonely as a shark. All his old friends simply swam away whenever he came close to them. Justin realised that his new menacing appearance was the cause of his sad plight. While out swimming alone one day he saw the mysterious cod again and couldn't believe his luck - he figured the fish could change him back into a prawn. He begged the cod to change him back, so - lo and behold - he became a prawn again.

With tears of joy in his tiny little eyes, Justin swam back to his friends and bought them all a cocktail. (The punch line does not involve a prawn cocktail - it's worse.)

Looking around the gathering at the reef, he searched for his old pal but he wasn't there. "Where's Christian?" he asked.

"He's at home, distraught that his best friend changed sides to the enemy and became a shark," came the reply.

Eager to put things right again and end the mutual pain and torture, he set off to Christian's house. As he opened the coral gate the memories came flooding back. He banged on the door and shouted, "It's me, Justin - your old friend! Come out and see me again!"

Christian replied "No way man, you'll eat me. You're a shark, the enemy and I'll not be tricked."

Justin cried back "No, I'm not. That was the old me. I've changed!"

They wanted to give the monorail a jazzy, African sounding name. So they sent out a memo to a bunch of zoo staffers saying, "What shall we call the monorail at the Wild Animal Park?" One of the memos came back with "WGASA" written on the bottom. The planners loved it and the rest is history. What the planners didn't know was that the zoo staffer had not intended to suggest a name. He was using an acronym which was popular at the time. It stood for "Who Gives A Shit Anyhow?"

I heard that the nursing home down the block is experimentally using Viagra to keep the male clients from falling out of bed.

Did you happen to hear about Cyclops closing his school? It seems he only had one pupil.

What do you call it when a group of psychologists go swimming naked?
A Freudian dip.

Why did the toilet paper roll down the hill?
To get to the bottom

How do you catch a unique rabbit?
Unique up on it!

After the earthquake one mountain says to the other mountain, "Hey, it's not my fault!"

What kind of beer do vampires drink?
Blood Light

Why can't you hear a pterodactyl go to the washroom?
Because the pee is silent.