Oh hell... WASHINGTON — The FBI is investigating the hanging death of a U.S. Census worker near a Kentucky cemetery, and a law enforcement official told The Associated Press the word 'fed" was scrawled on the dead man's chest.

Boys... War may have just been declared. Now we just have to figure out who's declarin' it.
Posted by Nate at 7:10 PM No comments:

Counting the Cost of Girl Power

Empowering words come easy. Dare I say... cheap. What's easier than looking at a child and saying, "You can do anything."? For going on 3 decades now we've rammed that lie down the throats of our girls.

You can do anything.

Maybe so... but you still have to pick one thing... and by picking that one thing you must then sacrifice virtually all the others. You don't get to be a professional football player and a rock star. It doesn't work.

Now this is nothing new for boys. We've done it forever. Oh sure it may take boys a little while to figure out that they aren't going to be the quarterback for the Dallas Cowboys... but they eventually get around to it... and even those that have been blessed with atheleticism such that professional sports is a legitimate career choice... they instinctively know they have to choose one. Charlie Ward won the heisman trophy as Florida State's quarterback... then got drafted to play point guard in the NBA.

Unfortunately... for all their education and high minded child psychology... it hasn't yet occured to our egg headed educators that maybe they should be explaining this same realism to girls to.

Girl power has had many consequences. When I look around and see these 20 something females paralyzed... wholly incapable of making a life choice... I am reminded of Girl Power. Well... you tell me... if you've been told your whole life you can be anything... what would you pick? And then how satisfied would you feel with your life... after having those words drilled into your head for decades... only to end up as a human resources officer at some hospital?

And there is another obvious consequence. Look around at the pressure women put on themselves. Don't you think it could be related to the empowerment they were subjected to as kids?

The fact is a generation of feminists grew up sheltered and secure from the pressures to perform... and then prompted decided to drop the weight of the world on the shoulders of the kids of the next generation. With empowerment comes expectation. You can pout about it the unfairness of it all you'd like... but it won't change. Its like a law of physics. Actions and reactions folks.

This girl power crap has to stop. Because Girl Power is killing our girls.
Posted by Nate at 9:06 PM No comments: 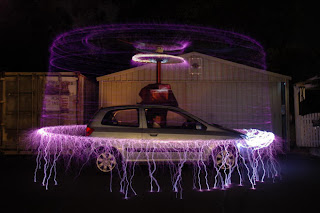 Fun with tesla coils! Now... I wonder how big it has to be to strap on top of an Escalade...
Posted by Nate at 6:48 AM No comments:

United we fall. Got it backwards says you? Depends on who the we is says I.

If by we, you mean those of us in fly over country, then we only survive through division. We're fighting to tread water people... and in their crazed psychotic panic the zombies on the coasts are pulling us under the water with them. We have two options... give up and go down with them... or kick them in the face and pull ourselves out.

I hereby challenge you to name one single issue that there is not massive disagreement on in this so called united nation.

And disagreement is one thing... we've always had that. What we've only had on rare occasions... is hate. Hate is what we have today. We hate each other. Urban hates Rural. Republican hates Democrat. Liberal hates Conservative. The South hates the North. The West hates the East. Everyone hates California.

The United States is divided. More so than its been since The War.

Its a national freakin' holiday. The NFL season starts in an hour boys. Light 'em up.

Ahh.. but what to look for tonight? We keep hearing that the Titans lost Haynesworth. Newsflash: The Titans didn't have Haynesworth or Vanden Bosch when they dismantled the Steelers in December.

And the vaunted Steelers Defense? What about Rodney Harrison? Yeah... what about him? The Titans Left Tackle, Micheal Roos, completely shut him down last year. Do you suppose he won't tonight? I certainly don't. Football doesn't work like that.

Oh but Towelgate! The Titans stomped the Towel!!!! The Steelers will be extra mad and play hard!

Yeah... like they weren't playing hard back in december when Home Field Advantage was on the line eh? Right.

Here's the truth: The Steelers did more to disrespect that towel by the way they played than the Titans did by stomping on it.

Democrats are Face Palming Themselves

All over the country right now. Yes yes... One of the most amusing stories I've seen in a long time. ACORN actually helping a couple set up a child prostitution ring... Telling them how to file the taxes on it when the "very young" girls from el salvador finally get to america.

Seriously you can't make this stuff up. You really can't.
Posted by Nate at 7:40 AM No comments:

I've worked JQP about as much as I can. Come on ladies... who has a honey do list that needs some cleaning up? He works hard... works cheap... and is completely house broken. I officially vouch for him.
Posted by Nate at 9:00 AM No comments:

The Red Stick Ramblers - Made in the Shade

I had to post this. I know... Its turning into a regular music blog. Its not my intent but lately I've found a few obscure tunes that I thought you guys would enjoy.

It this don't put a smile on you're face I probly can't help ya.

Petrified Wood Found on the Moon

What? You don't believe it? Why of course its true... otherwise the American Government must've lied to someone... and we know that's just not possible.

I can't believe this isn't bigger news... I mean here this authentic genuine bonafide moon rock was actually petrified wood... then clearly there has been life on the moon! Not just life.. but trees... and all the things that go with them.. water... atmosphere... all of it.

Friends... its the most important discovery of all time.
Posted by Nate at 7:19 AM No comments: