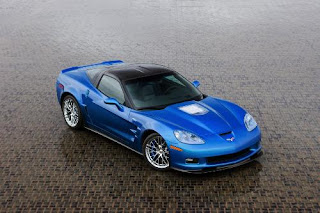 Chevrolet CEO Wagner has stated plainly that he cannot wait to stack this car up with the Ferrari 599... or the Lamborghini Gallardo.

His enthusiasm is justified. Going by horsepower to weight... the ZR-1 should snatch either one up like a ill trained puppy and rub its nose in its own poo.

Please do not think of this as a beefed up Z-06. Its not. They considered naming it the Z-07... but it was pointed out that this is way more than 1 better than a Z-06.

And that was all the approval the engineers ever got. They dubbed the project "blue devil" for Wagner's alma mater... Duke... and a small group of gear head engineers went to work... pretty much 24/7... for years.

This is the result.

The most advanced... highest performance... end-all-be-all Corvette ever put together at the factory.

In 2009... Ferarri owners will have to pay very close attention to the little badge on the back of the Corvettes they decide to pick on.

If they happen to mistake a Zr-1 for a Z06... they're gonna find an ugent need to wash their face.