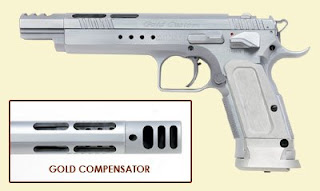 I present the EAA Witness Gold Team. From the lightened slide, to the compensator, to the ported barrel, to the trigger stop... this bad boy is competition ready out of the box... and not to mention... its just about the coolest looking handgun I've ever seen. A recent bit of knowledge has gotten me a little excited about the old .38 Super again... which by the way is an option for this beauty. See... Any .38 Super... will also reliably shoot 9X23 Winchester (upon reflection I would like to amend that statement. You would be a spectacular idiot to shoot 9X23 our of a Glock) . That caliber shoots right with the very hottest of the .357 magnums. If a 147 grain silver tip rolling at 1400fps won't do the trick... I don't know what will. Obviously 9x23 is firmly entrenched in the competition shooting world... but its starting to gain respect as a hunting and defense round. The mags can be modified to allow this bad boy to carry 19+1. Of course... if that's just not enough diameter for you.. fear not... the Gold Team also comes in .45 acp.