ATF: SHOT 2009
So Luke I are down in Orlando... probly cold where you are eh? Yeah that sucks... anyway... we're down here enjoying SHOT 2009. Boys I can tell ya... I have seen many things. I've fondled many... firearms... and knives... and accessories... for... firearms... and I took a test ride on a Rockon two wheel drive motorcycle. The show is unbelievable. Think of the largest mall you've ever seen... now imagine the entire thing packed with gun stuff. That's SHOT. A google search would provide you more information.. you can even look at the exhibitors list... which will give you another idea of scale. We walked roughly ten miles today... and saw a little less than half of the exhibits. Madness. 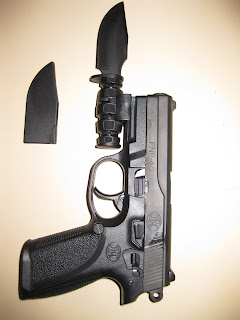 We didn't come home empty handed of course... much swag has been had... and Luke even managed to find a bayonet for his FNP-40. But wait you say... the FNP-40 is a pistol! You can't put a bayonett on a bloody pistol!
Oh you can't? 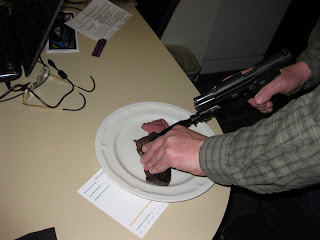