Hey y'all... well... truth is... its Friday night but I'm not in much of an ATF mood. Jeb threw up for the first time this morning. Well... not the first time. But the first time since he's been old enough to remember it. I mean... literally its been years since he had a technocolored yawn.

Man... he was so scared... so totally freaked out. He didn't know what had happened to him... he acted like he thought he'd done something wrong. The kid looked up at me... sick as a dog... and about half-whispers, "I tried to keep it daddy."

So I've been busy tending to a sick little boy... and most of the day I've been thinking. Maybe this is the reason that learning to control our emotions is so important to men... because see... most men become daddies eventually... and when it comes to our kids... well... lets just say things can go from calm and cool to code red in a heartbeat.

I don't think we daddies deal with the perceived suffering or peril of our children very well... and without that training... without that iron grip on our emotions... I just wonder how bad the blood bath would be.

I remember back when Jeb was born... he was so bruised up... it was awful. He and Julie both had to be readmitted the day after we went home. His billy level was bad... so they sent us home with some lights to keep on him... but they weren't doing well enough. We took him back to the hospital around 2pm to get him in one of the big incubator deals.

I guess it was around 9pm and they still had not brought the lights to his room.... my kid had been without lights for 7 hours now.... when I had lights at home I could've been using... anyway I found myself out in the hall of the hospital... honestly sizing up interns, residents, nurses, and janitors. I clearly remember thinking... which one of these am I going to have to kill to get my son taken care of.

It was a cold... calculated... acceptable act at that point. It sounded perfectly rational in my head. Obviously I was able to keep it all together... but I now wonder if I would've been able to if I'd been raised differently.

The look on his face this morning... scared and apologetic... man it just tore me apart. Something in it was related to what I felt in the hospital that day... and its had me all screwed up ever since. Maybe it was the helplessness... I dunno...

Here... I won't bum you out completely. How about a caption contest? 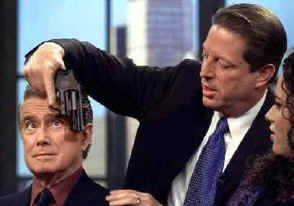