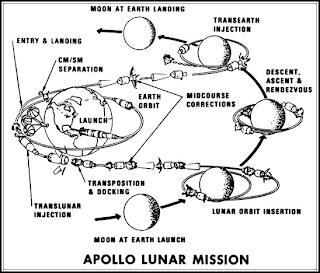 Take a good look at this picture. That is an illustration of the Apollo missions. NASA apparently drempt this up... and presented it as a reasonable and realistic plan... without snickering to much.
Launch the rocket... get into orbit.. then at precisely the right time.. refire the engines... again.. for just the right time... and slingshot around the earth to gain speed... then its off to the moon.
With slide rules...
Seriously the Apollo space craft had less computing power than a 1990s casio watch. But you expect me to believe... that these same people in this same agency still manage to kill 14 people so far... with today's technology? Doing far less complex missions?
The space shuttle can't reliably go into EARTH'S orbit and back... but you want me to believe that a 1960's barn metal jalopee... built with all the precision HAND TOOLS can possibly provide... made it to the moon... several times?
People... it was an honest to God miracle they ever got one of these things into orbit at all. I mean seriously... do you know what these things were made of? Aluminum. Lots of aluminum... with rivets! Rivets I shit you not.
Today... we could built one of these bad boys... brand new for probly... oh what... hundred grand? 2 hundred grand?
Well?
Why hasn't anyone else done it?
There isn't a 2nd world country on the planet that doesn't have the resources to recreate the apollo program. Why hasn't brazil taken a tiny fraction of their budget and sent a couple soccer players to the moon?
I'll tell ya why...
Because its never been done before... and no one... no one has figured out how to actually do it yet.
Posted by Nate at 8:47 PM