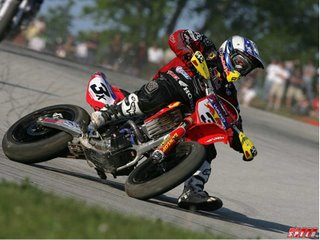 So we spent Saturday at an AMA Supermoto race in Nashville. I tell ya... 45 bucks goes a long way. For that ticket price we got choice parking, choice seating, free 20oz cokes and chips on the party deck, pit passes, and vouchers for hambergers, hotdogs, or drinks at the concessions. If there's a better bargain out there I don't know about it.

I realize some of ya may not know what Supermoto is. Its basicly racing dirt bikes with street tires. The track is 80% pavement and 20% dirt. There is a good mix of highbanked nascar turns, as well as driveway tight 180's. 20 guys racing into a turn that's not wide enough for your SUV make. Seriously... in my Titan I would've had to do at least a 3-point turn.

I've not had this much fun in a long long time... The racing was hardcore. Ward's bike died in the last turn before the finish... dude wanted the podium so bad he actually pushed his bike across the finish line, because he "didn't want to waste time trying to start it."

No wonder he's leading in the points. Still... the Yamaha factory boys owned him Saturday night. There's no nice way to say it.

Man that was fun. If you ever get a chance to go see a supermoto race... even if you have no interest in motorcycles... I promise you'll get a kick out of it. You've never seen anything like this. Just look at the picture.
Posted by Nate at 7:18 PM