Was the Dodo That Bad?

There are literally thousands of species of mammals that we've extinct. Don't even mention the birds we've eaten or the billions of varying bacteria we've boiled out of existence. Some had it coming...

What did the Dodo ever do that was so bad that it should be extinct... 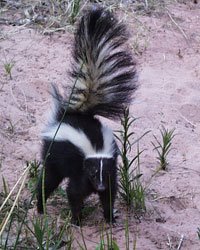 Yet this thing thrives. The Pole Cat remains... in all its revolting splendor. Its everyting that's horrible and evil about a cat... armed with the most noxtious weapon to ever be loosed upon the earth.

Seriously... was the Black Rhino that bad?

Do you ever drive for ten minutes... suffering... because a Black Rhino decided to get territorial on some unsuspecting dog, a mile from the interstate?

Sadistic joy at my brother's suffering aside... I have had it with these damned things.

Extinct the Pole Cat says I. All of them. Every species. Every classification. Every damned one of them.

Its our planet dammit. God said so. Its time we cleaned it up. I can't think of a better place to start. It should be a government program. 20 bucks per skin. 300 bucks for the scalp of any scumbag trying to breed, save, or otherwise aid the wretched things.