While it is regretful that I miss the standard ATF post last night I assure you it was not without good cause. Friday morning at 6:40am I loaded up the Audi and rolled out for Bardstown, KY. JAC and I had been workin' out plans to meet Underwater Operative there and I was lookin' forward to the trip.

I dropped the top and passed the time with an Arturo Fuente.. sang along with Hank and Tent Tomlinson, and ok... even The Offspring... it was a good road trip to be sure. 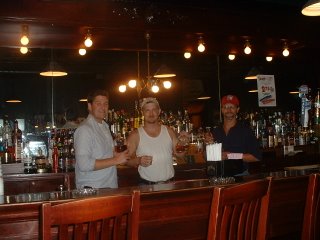 JAC and UO were already at Talbotts Tavern when I got there... I'll be damned if they didn't start drinkin' without me. No account sum-bitches.

I should describe Talbotts for ya... Honestly... its like Mecca for bourbon lovers. It was established in I believe... 1779... and its been open every day but Christmas ever since, apart from one 2 week closure for renovations back in the 80s. Its a massive stone building... with dark wide-plank hardwood floors. Its quiet.. cool... dim... Its.... Perfect.

The three of us drank, ate, told lies, and flirted with the waitresses for a couple hours. It was pretty sad really... the girls were hittin' on UO real bad. He's takin' though... He remained strong. Pure as the driven snow... I declare it so.

JAC however is a scoundrel and a rapscallion. 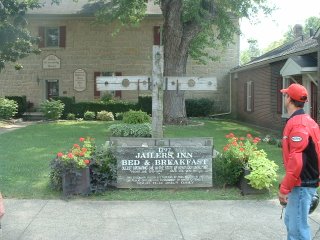 ext to Talbotts is the Jailer's Inn... a bed and breakfast that used to be the oldest operational jail in Kentucky. They still have the stocks out front.

From there it was off to Makers Mark down in Loretto Kentucky for the tour. Expectations were pretty high for the tour, as everyone says its the best one around... but we were pretty disappointed. They only show the dipping line and the warehouse. The whole tour lasts about 20-minutes, unless you have a bunch of stupid yankees asking stupid questions to try to impress everyone. Naturally we did.

After Makers we found ourselves free... with time to kill... so we did what God Fearin' rednecks do under those circumstances... we went back to the bar and got loaded. We tried every good bourbon they had... which was a lot. We tried everything from Henry McKenna 10-year (bleh) to Four Roses Single Barrel (bleh), to Silver Eagle (BEWARE! You WILL GET DRUNK), to Rare Breed and Bookers. Knob Creek and Russels Reserve is a given.

We finished the day off with a big ol' ribeye cooked right, and sobered up with some damned fine sweet tea.

I presented UO with an autographed bottle of Makers from my very own barrel, to commemorate the event. He'll probably pass it down to his grand-kids... who'll wonder just what the hell a bloggerblaster is... oh well... hell of a thought though right?

All in all we had us a fine time y'all. If ever you need a vacation.. I highly recommend Bourbon Country. Stay at the Jailer's Inn... that way you can stagger back to your room, a scant few paces from the Bourbon Bar at Talbotts... home of the world's finest bartender... site of the greatest lies ever told... Keeper of the finest whiskey on God's Earth.