By now I'm sure you can see that the bug has JAC and I squarely by the balls. We are each at this very moment quite nearly obsessed with our next ride. While troopers from Arkansas to Texas are still talking about our last ride... we expect this one to be quite different.

See kids... I have this fetish... I see these old dirt roads and I always think... "wonder whats down there?" It eats at me. Its like an itch ya just can't scratch.

It was I that started JAC down the path of Dual Sport doom... and don't think for a second that I'm not royally pissed that he's the one that ended up with the KLR before I did.

Bastard. I swear... no one will stick a hot poker up your ass like kin.

but I digress... It seems this time we're takin' the roads less travelled... and that's fine with me. 'sept it leaves me in a quandry. I have no mount. JAC's in the same boat... but he'll just go grab another KLR and call it a day.

I love the KLR. Love it. I used to fantasize about blasting through the mud and muck, and jumping over harleys. But now? Now I find myself looking at two bikes...

The KLR: Those of you who also read Threeway know this bike. Its the John Deere of motorcycles. It is not the fastest... it just runs... forever... and nothing stops it. It has a following like no other vehicle ever produced. Anything you will face has been documented and overcome 1000 times... and someone makes a part that will prevent it. The US Marines ride KLRs. I don't know what else to say.

The XR 650L: Big Red. Truth be told, if you made every modification every KLR guru ever came up with, you'd h 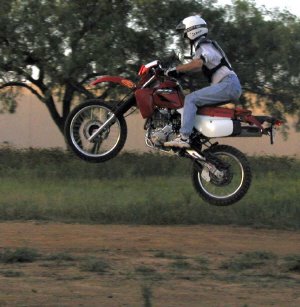 ave something approximating an XR650L.... minus 30 horses... which is about all the KLR makes in the first place. Saying the XR is more capable in the nasty dirt, is rather like saying my CBR 1000 is more capable on the interstate. Double the horse power... a real dirt suspension... 135mph top speed... and a charging system that will handle more than your average LCD clock. Sounds like a no brainer right? Not really. This nasty ol' whore stands 41 inches off the ground at the seat... meaning I'd need a step stool to mount her... sure once I got up there it'd be the ride of my life... but it wouldn't be safe by any stretch. This bitch is packin' some serious heat. If I can lower the thing considerably... I may be picking one up. It would need a new seat for sure. Word is it vibrates much less than the KLR, but gets worse gas milage... and that's not good, because where we're goin', milage matters.