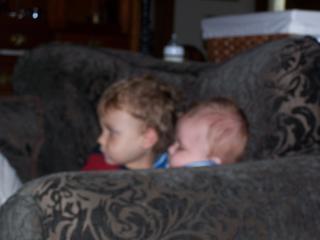 I love these two. Seems like for the longest time, everyone we talked to about Jeb would have something negative to say about our next kid. Jeb slept so good... he was such an easy baby to get along with. People commented a lot. They'd say things like "Wait till the next one comes around!"

Well.. the next one came around.

Me and Jeb love havin' Eli around. He laughs at us... and hey... you probably would to if ya saw the way we run around the house and throw things at each other. Eli loves for me to sing... which you can imagine is torture to about everyone else in the house... but hey... If a rowdy rendition of "Ramblin' Man" is all it takes to keep a little one laughin' outloud... hell... what else do ya want?