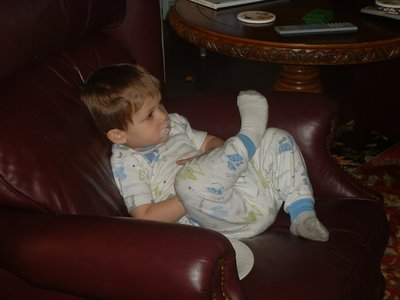 Its been said that I don't post enough pictures of the boys these days... I thought I'd throw one up of Eli. I suspect the last time y'all saw him he just a wee lad... not the monster you see before you here. Eli's not two yet and those PJ's are 3T. He's over the 90th percentile in both hieght and weight... hell... at least once strangers have mistaken him for a three-year-old.

Its rare enough to find him actually sitting still... but when I found him in his standard pose... foot propped up and all... I had to get a pic. Also... note the white powder on his face. He'd literally just stuffed a whole powdered donut in his mouth. The kid eats everything in a single bite. Its like living with a wee Homer Simpson.
Posted by Nate at 7:10 AM