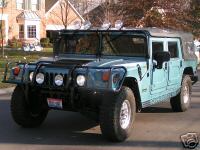 Right up the powerline,
we're goin' 45,
through 2-feet of snow,
and we're still in over-drive!

We headed up to Coopers Rock State Forest last night and commenced to raisin' 7 kinds of hell. There are these old cow-path fire roads that run all through it.. and we just blasting down them. Sure... the word is there are more capable off-road vehicles... but I've now gone up a 60 degree incline in 2 feet of snow. Have you?

The thing is a tank. Seriously. You just don't even worry about hitting these huge ruts... these 3-foot piles of dirt, rock, and snow... you just hit them and go on. We weren't even slowing down.

The off-road driving I have done is crawling. Ya put the truck in 4-low-lock and take your foot off the gas. The truck rolls on and nothing in the world will stop it. That's been the total of my playing off road.

With this thing? It's totally different. You just go. We only locked the differential for one particularly insane stretch that had large ominous warning signs all around... even still... the Hum-Vee ate it all up and begged for more.

I feel like I've been bull-riding. Hey... when ya get a 7000 pound truck airborn... the impact tends to be a little rough... and we did it more than once.

So what do I think of the Hum-Vee?

We spent the better part of 3 hours destroying terrain that can best be described as unfit for motorized travel. She didn't flinch. She just stomped, pounded, and blasted her way through it all.

It's a tank with 4 tires. As huge as it is... we were rolling down these little cuts with no problem... largely because the beast's turning radius is a tight tight 26 feet. Unbelievable.
Posted by Nate at 7:51 AM