Fun With a Grease Fire

It's amazing how fast things can go to shit for a stay-at-home dad. Seriously. You throw two hotdogs on the grill... then you take the baby off to change his diaper... then the 3-year old has to go potty... then you get caught up watching the lastest sportcenter segment on some coach's kid offing himself...

The next thing you know.. that three-year old is pulling on your hand saying, "Daddy! Daddy! Get Jeb's stool! Jeb up! Jeb watch fire!"

So of course ya run in to the kitchen and blow on the fire a few times while you determine if it's bad enough to warrant getting out the extinguisher... luckily it's not that bad and it goes out pretty easily.

I say it wasn't that bad... check the results. 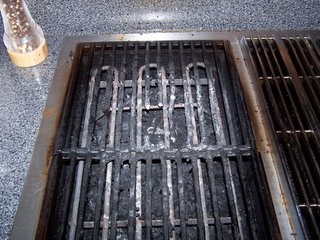 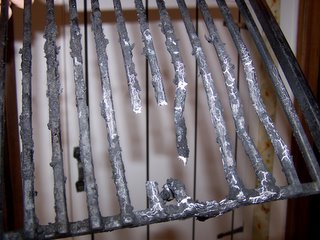 As you can see the steel bars of the grill actually melted complete through in several places. Oddly, the hotdogs weren't nearly as maimed as you would've expected. I really don't understand it. I've cooked big thick steaks longer than this... and had several grease fires that were far worse... but nothing ever did this kind of damage.

Ah well.. no harm no foul. The smoke detectors didn't even go off... though I confess at this point I'm going to change the batteries to be sure. The boys loved it... I guess that's what matters.
Posted by Nate at 6:12 PM